On August 16th 1858 international communications changed forever when Queen Victoria sent the first official transatlantic telegram to US president James Buchanan. The message took 16 hours to arrive, travelling through 2500 miles of cable – a dramatic improvement on the previous time of 10 days.

The successful mission that laid the cables between the US and Europe was led by the gargantuan SS Great Eastern (below) and began on July 15, 1865. Correcting the mistakes that led to a failed effort seven years earlier would take time, but the end result would be lasting communications between the two continents, within minutes.

[Read more: From the candlestick to the Mickey Mouse – how the home phone has evolved] 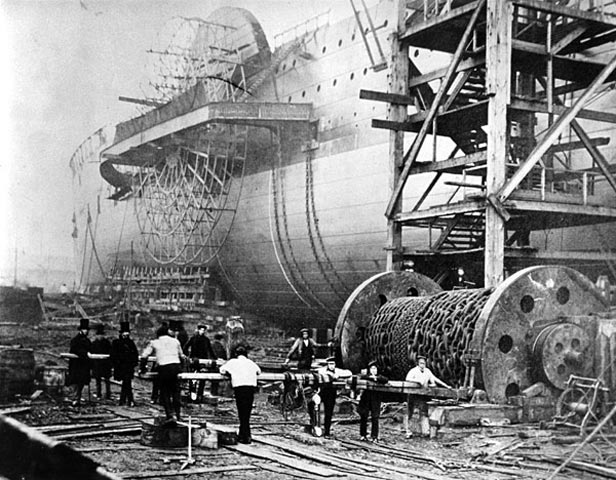 Prior to the laying of the first transatlantic cable in 1858, messages between Great Britain and the North America would take up to 10 days to deliver – the time it would take to sail between the two nations.

American Cyrus West Field, a pioneer in the telegraphy field, had long desired to change this with a cable spanning the width of the Atlantic Ocean.

Finally, following four unsuccessful attempts between 1857 and 1858, ships emanating from both sides of the ocean would meet in the middle, enabling the connection of two cables and the creation of a network 2,000 miles long and two miles deep.

It was an historic moment. The first message was sent from Valentia Island, Ireland on August 16, 1858 and read: “Glory to God in the highest; on earth, peace and good will toward men.”

Upon the success of the quest, Queen Victoria sent a telegraph to US president James Buchanan praising “an additional link between the nations whose friendship is founded on their common interest and reciprocal esteem”.

Via this first Atlantic cable, messages were sent via Morse code at a rate of one character every two minutes, meaning it took an hour to send just a few words.

Unfortunately, the new era of transatlantic communication was very short lived. Field’s first cable failed due to poor design, insulation and insufficient current to effectively transmit messages. The last complete message would be received on September 1 before the cable was abandoned that October.

It would take seven years for another attempt to launch following widespread skepticism and both governments’ unwillingness to fund such a venture. Enter the SS Great Eastern, then the largest ocean-faring ship in the world, which had been purchased on the cheap following its commercial failure as a passenger ship.

[Read more: When a telephone conversation was actually a telegram in the eyes of the law] 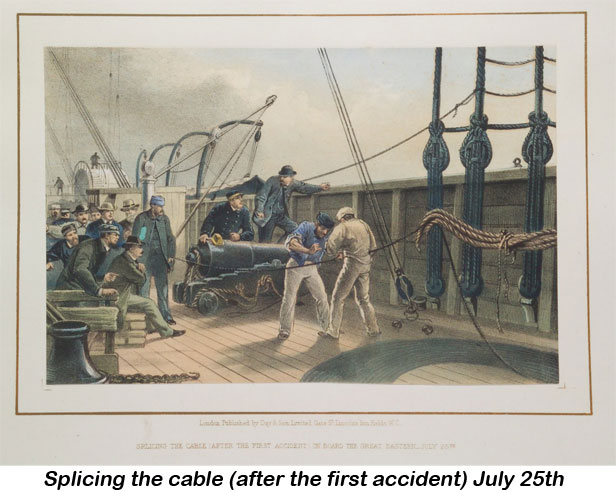 At the time, it was the only ship deemed big enough to carry the length of cable needed to make the complete trip. Indeed, it took two months just to load the cable on board. The 1865 cable weighed a 3,750lb per mile and had a redesigned copper core and insulation, which would enable more efficient and reliable communications.

The first effort began on July 15 1865 when the SS Great Eastern set sail for Newfoundland. However, just 1,098 miles into the journey, the cable snapped. Efforts to recover it failed and the vessel returned to port.

Almost a year to the day later, after West had procured further funding and subsequently founded the Anglo-American Telegraph Company, another effort commenced on Friday July 13, 1866. The idea was not only to lay a new cable, but also seek to salvage the broken cable and establish it as a backup.

This cable was completed with hardly any problems on July 27, 1866. It was pulled ashore in the tiny fishing village of Heart’s Content in Newfoundland, establishing the first permanent cable to exist between the two continents.

This time, the first message was: “A treaty of peace has been signed between Austria and Prussia.” 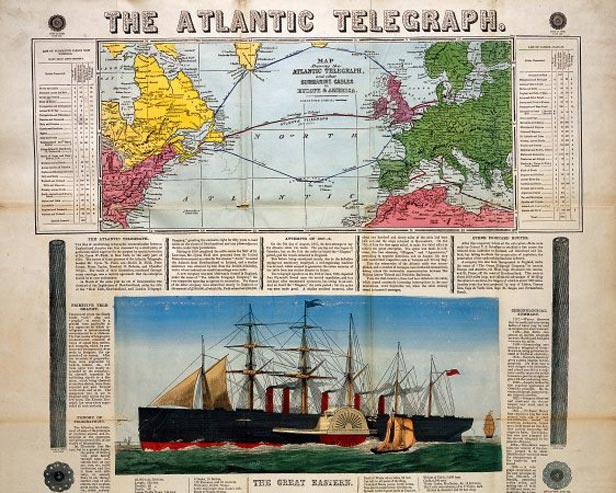 Messages could now be delivered to Newfoundland with great speed. The 1866 cable, which differed little from the previous year’s design, was much faster and could now send up to eight words per minute. It still took another 24 hours to reach New York on the North American mainland, but the transatlantic communications represented massive progress.

After the successful delivery, the SS Great Eastern soon set off on the second part of its mission, to retrieve and repair the broken cable from the previous year. It was no easy task as it lay two-and-a-half miles below the surface at an imprecise location 600 miles from Newfoundland.

Miraculously, the cablewas located by captain Robert Halpin after two weeks of fishing with a grappling hook. Early efforts to bring it aboard failed, but a second attempt proved successful. After 26 hours, the cable was connected to a fresh one ready and waiting in the hold on September 7, 1866.  There were now two cables, with this used as a backup wire.

While the new era was now indelibly underway, and further cables would soon unite the new world with Britain and Europe, sending telegraphs was still an expensive business.

In 1866 it cost $10 per word and there was a 10-word minimum. According to The Atlantic a farmer could feed himself for 60 days for the cost of a single word. As thus, 90% of communications were sent by big businesses.

It’s interesting to think of how quickly communications have changed, and how this long, meticulous mission led to the internet we have today – with instant global communication available at the push of a button.

Part of the original 1858 cable is on display at Information Age, a permanent exhibition dedicated to communication at London’s Science Museum.

Best reminder apps for iPhone and iPad in 2018

Analysis: How today’s most advanced cameraphones stack up against a DSLR

Brookhaven the latest city to partner with doorbell camera app

New iPhone 12 Leak Will Speed Up Your Next iPhone

16 child predators, including a cop and a minister, used apps such as Kik...