There are three parties in Anne Grindle’s marriage. First and foremost, there’s her husband Stuart, 75, to whom she’s been married — very happily — for 54 years.

But Anne, 74, also has to put up with the other love of Stuart’s life; something which consumes his every waking moment and requires round-the-clock care and attention: their garden.

For the Grindles are the proud owners of ‘Britain’s Best Lawn’ and the verdant patch outside the back of their house in Tickhill, Doncaster, is Stuart’s pride and joy.

Aerial pictures taken after a month of scorching summer heat this week showed the lawn, which covers a third of the couple’s picturesque garden, in sharp contrast to the parched, brown plots of their neighbours.

As Britain has been scorched, Stuart’s prizewinning patch has flourished — thanks to several hours a day of mowing and pruning, not to mention an ‘inordinate’ amount of water costing £800 a year. 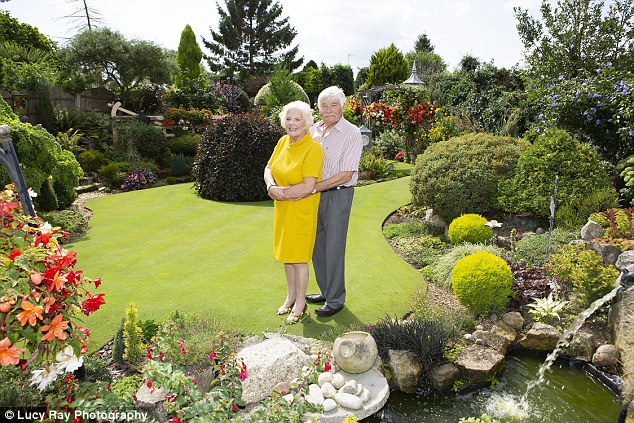 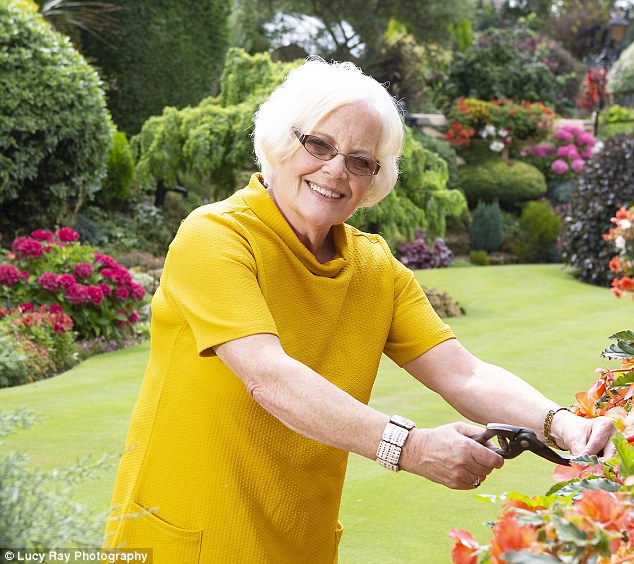 In real life, the grass is even greener than it appears in photographs, glowing almost fluorescent under a cloudless sky. Not a blade — cut to a uniform 5mm — is out of place, while neat, stripes run from one end to the other.

Walking on it is like stepping on a luxurious, deep-pile carpet: soft, spongy and springy. Stuart insists I take my shoes off — stiletto heels are banned — and watches hawk-eyed as I pad around barefoot, lest I put a dent in his hallowed turf.

But grass like this — and indeed the remainder of Stuart’s magnificent floral display — doesn’t grow itself. This is the product of 42 years’ hard work, something Anne, the UK’s longest-suffering gardening widow, knows only too well.

‘That bloody garden,’ she says, with a fond but well-worn smile. ‘It’s become an obsession. We’ve lived and breathed it since we moved to this house in 1976.’

‘Oh, I tell you, we’ve had words about it over the years. It’s taken up a lot of Stuart’s time and a lot of our money.’

But that’s not the only way in which his obsession has affected their lives. The Grindles haven’t had a summer holiday in four decades — because he can’t bear to be away from his lush lawn.

‘I’ve said to Stuart so many times: ‘We need more holidays,’ ‘ Anne explains. ‘And he replies: ‘No, we can’t leave the garden.’ We don’t go on day trips. We can’t be away from the house for too long in one go. It’s like having newborn quads.’

Every day, from 6am to 10pm — or later if it’s still light — Stuart can be found on his hands and knees, ‘fussing over the plants’.

Anne got so fed up with him missing meals and coming in late that she had a bell installed outside the front door, which she rings when it’s time for dinner.

She says: ‘I said to him: ‘I’m only going to ring it once Stuart, and if you don’t come in then it’s off the table.’ He soon learned to come running when he heard the bell.’

She rings it to demonstrate and Stuart — caught red-handed doing some sneaky weeding while the Mail photographer changes her lens — stands to attention.

‘I know it’s time for tea when I hear it — and so does everyone in the street,’ he laughs.

But Stuart hasn’t always been so devoted to his garden.

He met Anne at a youth club and married her in 1964, when they were both 21, and says it all changed when they bought their second home.

‘Our first house was a terrace in Maltby, near Rotherham, South Yorkshire, and it had a tiny garden, no bigger than our patio today,’ he explains. 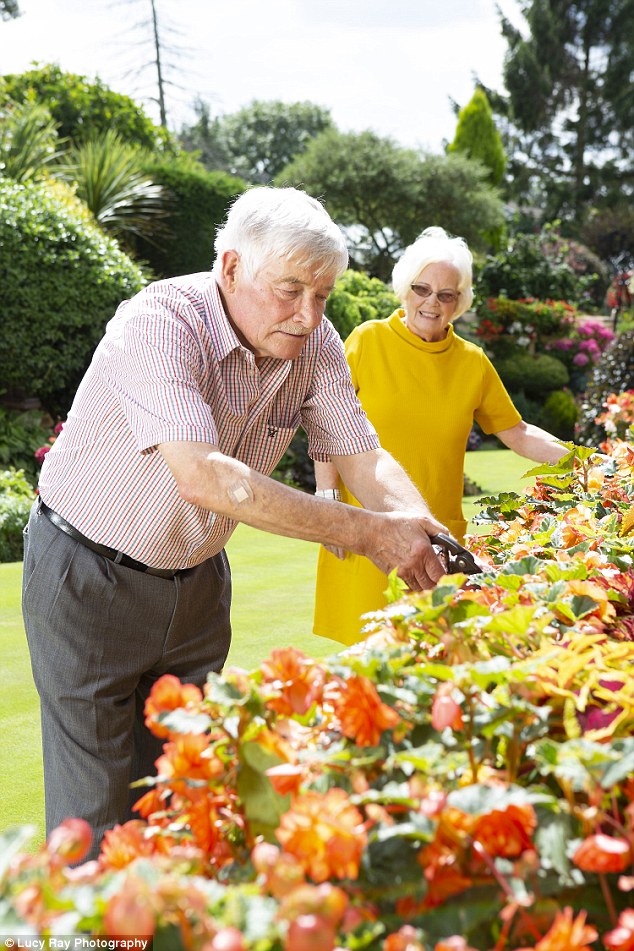 The garden takes hours of work to maintain, by Stuart, leaving Anne as a gardening widow

‘Anne’s mother used to tell me off for not cutting the grass. I’d say: ‘Sure, it’ll die down in winter.’ I didn’t do a thing.

‘Then, in 1969, we bought a house in a new development near Worksop. I decided it would be nice to have a lawn.

‘It turned out the next door neighbour’s father was a greenkeeper at the golf club.

‘He got me some grass seed and that’s what got me started. I’d be down on my hands and knees, pulling out weeds at all hours with a fork.’

During the long, hot summer of 1976, Anne and Stuart moved into their current home, then a derelict farmhouse. Stuart, who worked as a joiner, loaned the back garden to two colleagues who used the acre plot as an allotment but in 1981, when he’d finished renovating the house, he took over.

‘The first thing I did was plant a weeping copper beech tree,’ he explains. ‘It’s that big thing in the middle that looks like a Christmas pudding. Then I dug the whole plot down by two feet to create raised beds on either side.’

At the time, Anne was working as a sister in A&E at Rotherham General Hospital. While she was on night shifts, Stuart would sneak home flowers and shrubs for the garden and plant them before his wife could notice.

‘He thought he was being really clever, but I knew things were appearing,’ she says. ‘We didn’t have a lot of money, so I opened a book to keep track of what Stuart was spending on the garden.

Stuart looks sheepish. ‘I had lots of major projects on back then though, didn’t I?’ he pleads. ‘I was installing water features and the like — it wasn’t always so expensive.’ Anne rolls her eyes.

The couple’s only son, Jonathan, was born in 1973 and, as a boy, the sanctity of the family lawn was drilled into him. Football was forbidden, though Stuart admits he did allow him to play ‘gentle’ ball games and run ‘carefully’ on his immaculately-tended grass.

‘It sounds harsh, but I didn’t want a ball landing on my fuchsias and squashing them flat,’ he explains. ‘Thankfully, Jonathan wasn’t into football — he preferred military games — so I don’t think he missed out.’

As the years passed, Stuart’s gardening routine came to dominate his — and Anne’s — life. He retired in 1993, due to ill health, aged 50, giving him even more time to devote to his cherished patch.

His work starts in earnest in the spring, planting new bulbs in the hanging baskets and flower beds which line the lawn: everything from begonias to lobelias, hydrangeas to cypress trees. Vegetables are a no-no — ‘More hassle than they’re worth,’ he reckons.

Next is the lawn. Stuart uses a ‘scarifier’ — a bladed tool which looks like a lawnmower — to cut deep grooves into the ground. This helps the seeds — of which he uses two types, called ‘fescue’ and ‘bent’ — to settle in more quickly.

Even though the grass looks healthy, ‘over-seeding’ — applying seeds to an existing lawn — helps fill in bare patches. In summer, he adds feed containing nitrogen (which makes it thick and healthy) and in winter its main ingredient is iron (to promote strong roots). 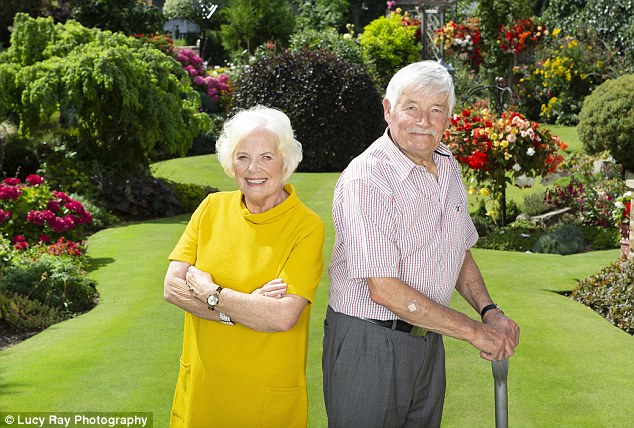 Every day at 6am, Stuart begins by ‘swishing’, which involves running a brush or length of hose over the grass to remove dew, dead bits and worm casts. He waters the lawn with a sprinkler every other day in summer, which — given the recent heatwave and looming hosepipe ban — some may see as excessive, but he insists he conserves water where he can.

‘Water is precious,’ he says. ‘You don’t need to drown the lawn. It only takes ten minutes. I have four 45-gallon butts to collect surface water from the roof, and the baskets and beds are on an irrigation system, which channels water to the roots. I run those between 6pm and 10pm. I’m on a fixed rate of £800 a year and I know that might sound like a lot — the average UK water bill is £400 — but if I was on a meter it would be worse. I pay for what I use.’

Then there’s the cutting. Stuart relies on a 1947 hand-pushed Ransome Certes lawnmower, which previously belonged to the groundsman of a bowling green, to trim the blades to a precise 5mm.

He cuts vertically and horizontally, which gives a finer finish, and then runs the mower up and down once more to create croquet-lawn stripes.

Finally, three or four times a week, he trims the edges using long-handled secateurs — or the kitchen scissors — and rakes the surrounding soil.

Stuart’s obsession has led to nightmares and he has woken up in cold sweats. ‘If something happened to it, I don’t know what I’d do,’ he admits.

Mercifully, disasters have been few and far between. There was the flood of 2007, when heavy rain turned the garden into a swimming pool (‘That was scary; it took me a week to pump the water out,’ says Stuart); a few close-shaves with a fungus which threatened to turn the grass black; and intermittent attacks by slugs and snails.

This year’s heat wave, he adds, has been a ‘continuous struggle’, and he is hoping for rain.

In 2015, his lawn featured on Gardeners’ World, last year he featured in a German newspaper, and during my visit the phone rings with enthusiasts begging Stuart to spill his secrets.

He insists he doesn’t have any — not even speaking to his plants, Prince Charles’s infamous technique. ‘But I do talk to the weeds, the blinking things,’ he grins.

The neighbours love coming round to gawp at the Grindles’ garden. They’ve hosted a few wedding photo shoots here, and hold an annual charity open day. 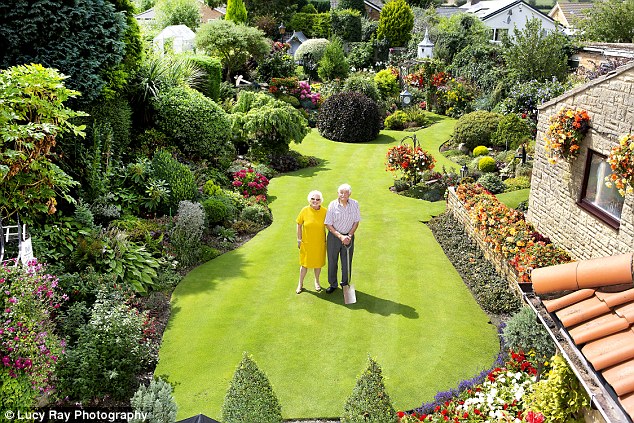 Sadly, for the first time in 15 years, Anne and Stuart had to cancel this year’s open garden. After a failed heart operation doctors advised Stuart to take a break from strenuous activity — including, to his dismay, gardening.

‘Anne took over while I was in hospital and she did a sterling job,’ he says. ‘I am a lucky man. I kept ringing up and asking: ‘Have you done this? Have you done that?’ I don’t even think I asked how she was.’

While he recuperates, a groundsman from the local golf club is filling in for Stuart. ‘He’s excellent but obviously he can’t spend the time on it that I would,’ Stuart says, adding under his breath: ‘I’ve got to say, if I was doing the lines on the lawn, they’d be straighter than that.’

Anne shushes her husband. ‘I just hope he’ll be able to get back to it,’ she says. ‘It drives him mad sitting on the patio and spotting things that need doing. It’s impossible to keep him still.’

Sure enough, Stuart’s on the move again, trundling off across his beloved lawn.

‘I suppose there are worse things he could do,’ says Anne. ‘I might be a gardening widow but I’m a very proud one — it’s such an achievement.’

Is your lawn as lush as Stuart’s? Send your pictures to femailreaders@dailymail.co.uk

7 Gadgets that gained popularity in the Coronavirus era

A Guide to Drone Photography/Cinematography for Architecture