Chinese smartphone maker OnePlus has built its reputation on offering the latest specs for a cheaper price than comparable devices from Apple, Google and Samsung.

The company’s latest device, the $549 OnePlus 6T available online and from T-Mobile nationwide on Nov. 1, is no exception to this formula. This time, however, the device has added a few tricks that not just put it on equal footing to the iPhone XR, Galaxy S9 and Google Pixel 3 but actually help it stand out.

First the basics.As one would expect, the 6T runs a speedy Qualcomm 845 Snapdragon processor, has a large 6.41-inch AMOLED display (up from the 6.28-inch display on the OnePlus 6) with dual rear cameras on the back and a single shooter on the front similar to its predecessor. The front camera has actually seen its notch cutout reduced, making the phone seem more like a full display than other “notched” phones such as the iPhone XS, Pixel 3 XL, LG V40 and the company’s 6.

Thanks to the larger size, OnePlus has upped the battery to 3700 mAh to improve the phone’s battery life. The company’s fast charging can still give a roughly 50% charge in half an hour when using OnePlus’ included cable and power adapter.

The phone runs the latest Android 9 Pie software with just a few OnePlus tweaks and supports the latest LTE networks from AT&T, T-Mobile, and yes, for the first time, Verizon. It can be bought unlocked online—though, in another first for the company, it will also be available in the U.S. at T-Mobile stores and on the carrier’s website.

Black is currently the only color offered, though, depending on the model, you will have the option of a glossy, shiny “mirror black” or a matte, smooth “midnight black.”

The three models will be available on the company’s website, though T-Mobile will only be carrying the $579 model in “mirror black.”

A new feature adds a new trick to a familiar device 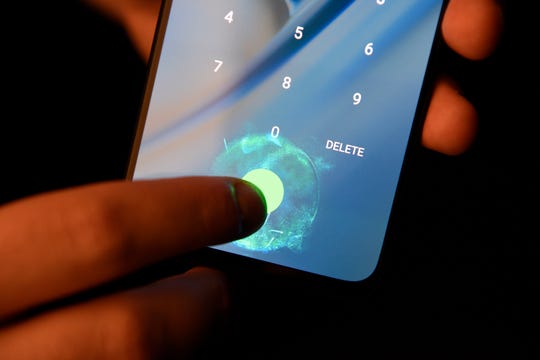 The fingerprint scanner on the OnePlus 6T is built into the phone’s screen. (Photo: Robert Deutsch, USA TODAY)

The biggest new feature on the 6T is its built-in fingerprint reader, not just on the back of the phone but in the actual display. When the screen is locked and turned on, a small fingerprint icon appears in the middle of the lower half, illuminating a virtual thumbprint for you to place your physical finger on.

While not as fast to unlock your phone as the company’s face unlock facial recognition or the dedicated fingerprint sensors found on the backs of other phones like Google’s Pixel. The feature not only feels futuristic but does, indeed, work and can be used to not just unlock the phone but pay for items through G Pay, Google’s mobile payments app.

OnePlus isn’t the first to use this technology, though it is the first company to bring it to a U.S. phone. In my brief time with the phone, the sensor did work as advertised, but using this type of fingerprint sensor takes some getting used to in order to make sure your finger is in the right spot.

All told, for $549 the phone has plenty to offer as an alternative to the pricey new iPhones, Pixels and Galaxy phones. But that’s not to say there aren’t any trade-offs.

The screen and cameras both perform fine, but they are not as crisp or sharp when compared directly to (much pricier) iPhones or the Pixel.

The phone is still not as water resistant as the latest from Apple, Google or Samsung. OnePlus says  that its phone can still withstand rain, spills, splashes or drops in the toilet. The speakers also are not stereo, and the phone lacks wireless charging, two standard features on high-end devices.

OnePlus founder and CEO Pete Lau says that the company made these decisions as a way to keep the phone’s value for customers. Adding water-resistance certification similar to the iPhone and Galaxy, for instance, brings additional cost, which would raise the phone’s price.

“The costs are particularly high for the IP67 testing and certification,” Lau told USA TODAY through a translator, referencing the independent certification that marks a phone as able to withstand liquids and at which depths. “And those are all costs that we pass along to the consumers.”

“Our rationale is that the person who wants to take the device swimming shouldn’t be able to raise the cost of the device for everyone; that’s our OnePlus way of looking at it.”

With the U.S. set to be among the first countries in the world with 5G networks, the expansion into T-Mobile stores and working with Verizon’s network comes at a seemingly perfect time for the company.

The U.S. market is very “carrier driven and the market is very much flagship focused,” Lau says, hoping that by continuing to expand in the U.S., it can become the “third option” to Apple and Samsung, particularly as flagship phones continue to get more expensive.

“Success for us is if we have consumers who say, or in their minds think, ‘what is the best Android (for the) price?’ and OnePlus comes to mind.”

iPhone 13 might finally bring a smaller notch and faster screens

A closer look at Microsoft Launcher 5.1 for Android’s new features

This week in Android: Black Friday and the Best of Android!