When you think of the New York surf scene, you probably think of Balaram Stack. And when you think of all the photos you’ve seen of Balaram Stack you’ll see a familiar name attached to the majority of them. That name is Mike Nelson — born and raised in NY and an integral piece of the burgeoning surf scene in the Empire State. Through his photography and his surf shop (Unsound Surf), Mike has helped shape NY surfing for over 20 years.

How did you get started with photography?
I was given a waterproof Olympus 35mm point and shoot as a gift about 20 years ago. Looking back at it, that camera jump-started my addiction for capturing a surf photo from the water. Later on, once I started to get serious about surf photography, Dick ‘Mez’ Meseroll ( ESM co-founder and all around great guy ) definitely mentored and helped me grow as a photographer. Mez is an absolute legend! 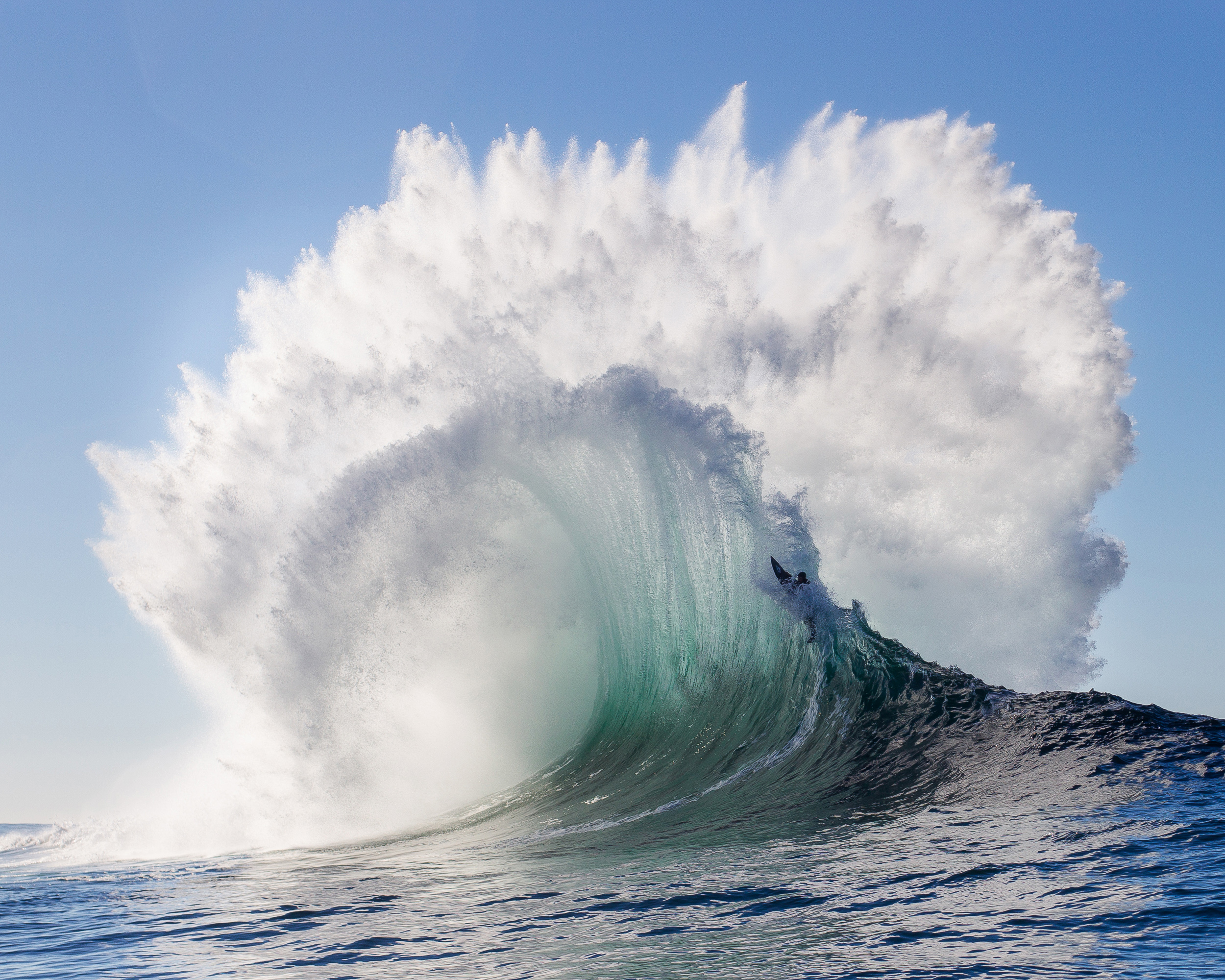 What’s in your camera bag?
I have been a Canon guy forever, and I have everything but the kitchen sink in my bag these days. 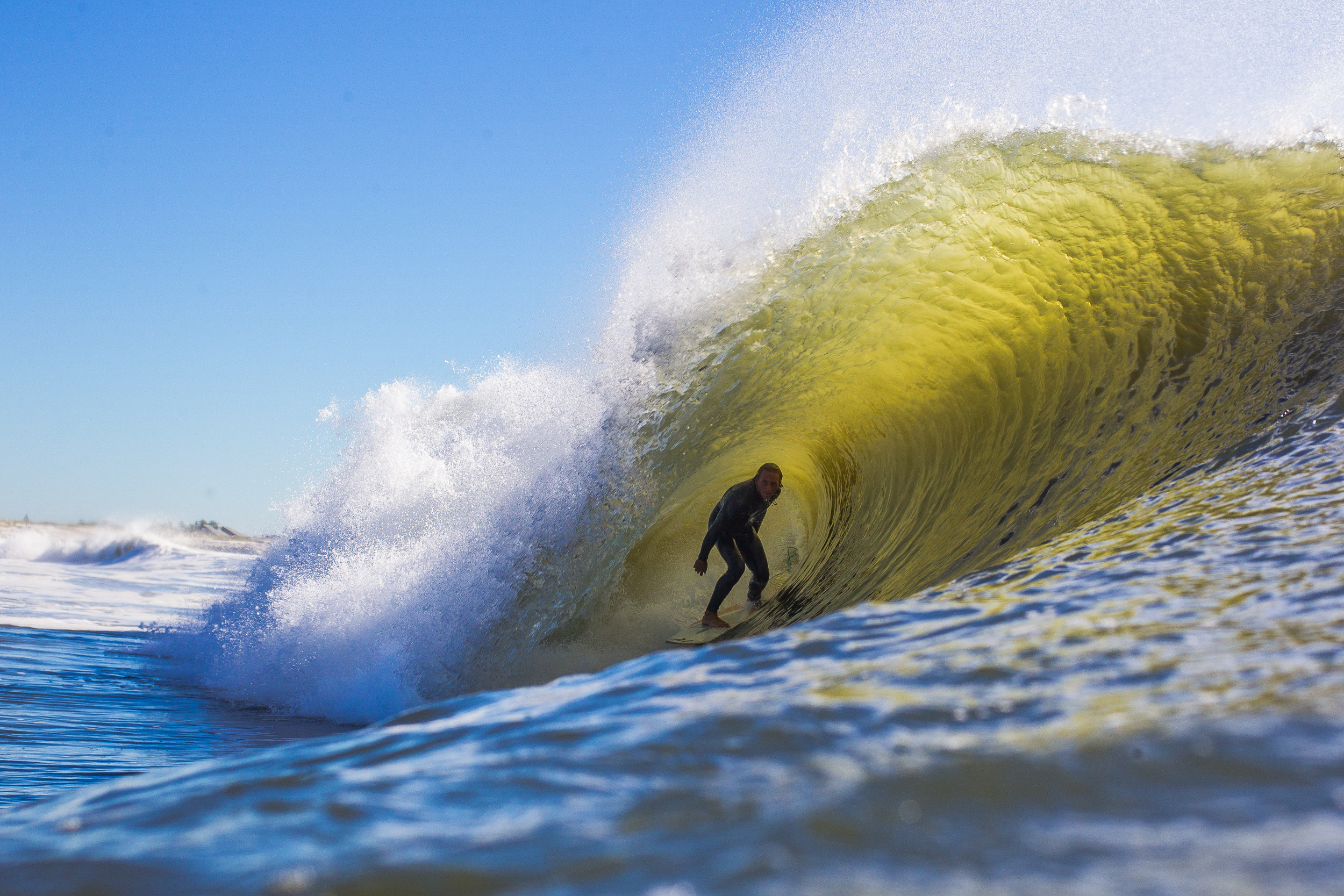 What inspires you?
I’m definitely inspired by other surf photographers in my region. Brian Nevins and Matt Clark in particular. These guys are incredible and I always love to see what come up with each and every swell. Other then that, big serious surf definitely motivates me to try to capture something special.

Where are you from and where are you based now?
Born and raised in NY. I currently live in Oceanside, NY only a few miles from where grew up. 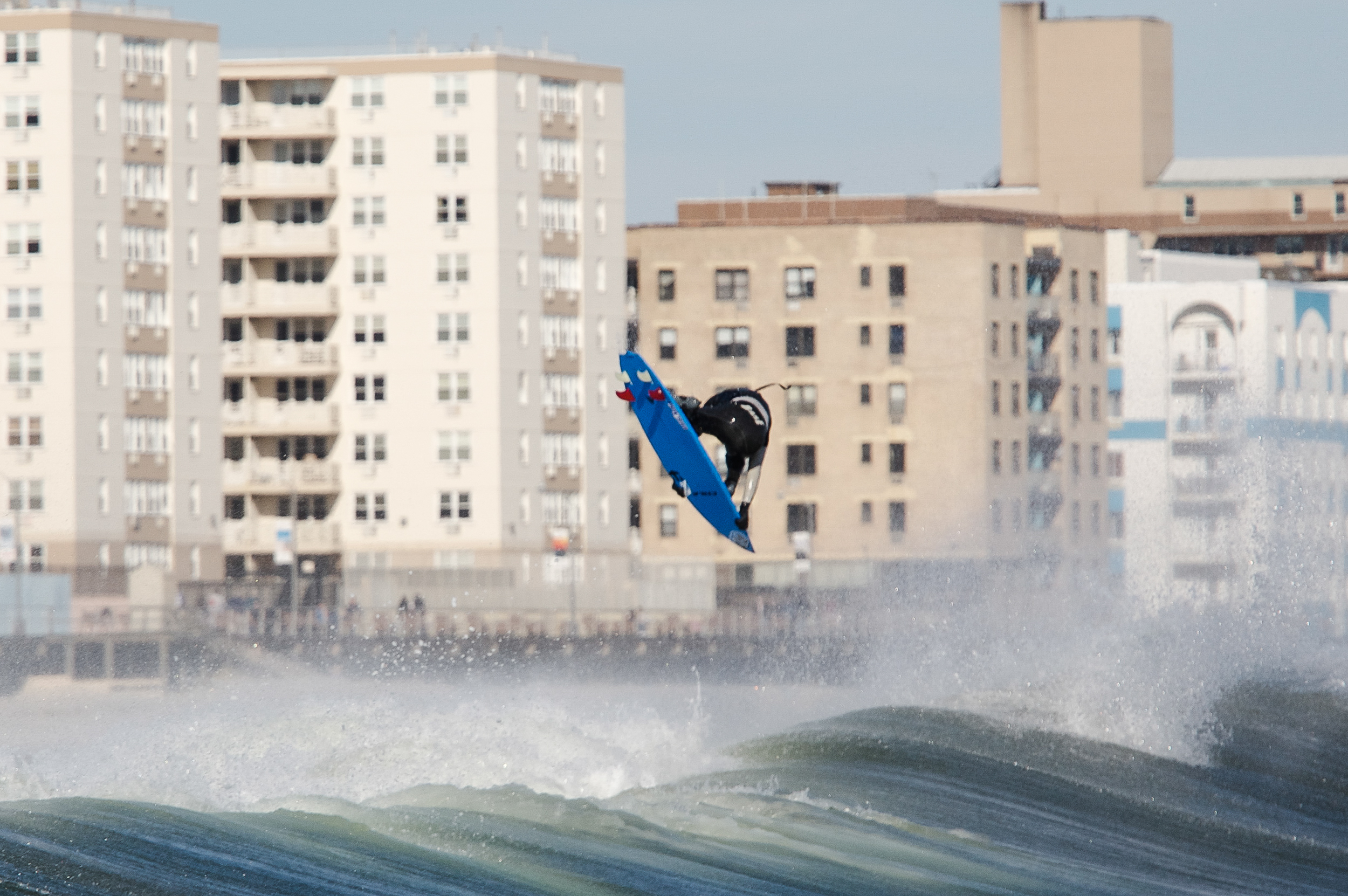 Pros and cons about shooting in NY?
Pros: When the stars align the waves can get really, really good. Beyond surf photography, there are a ton of opportunities in NY for someone to make a living as a photographer.

Cons: Definitely all the west wind in the winter (sideshore for Long Island) and the long, mostly flat, summers.

Where is your favorite location to shoot?
Anywhere on Long Island that is big and barreling.

Favorite surfer to photograph?
Balaram Stack. He is so dynamic in the water and we have been shooting together for so long that I pretty much know what he is going to do before he does it. My long-time friends Ryan Carlson and Will Skudin would be a close second behind Bal, I definitely get excited when I get to shoot with either of them. 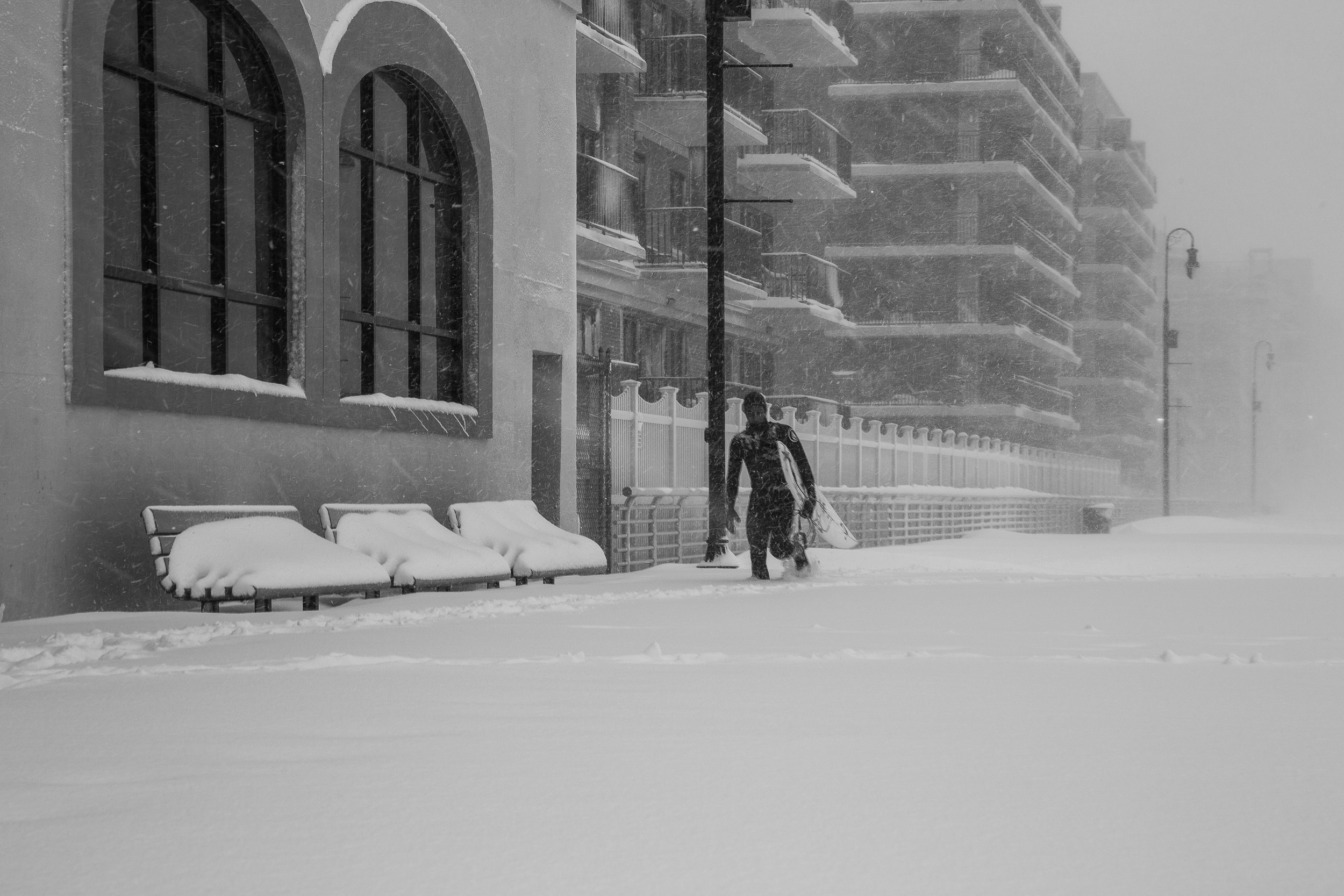 It definitely seems like you have a special relationship with Balaram. How did the two of you originally link up and how old was he when you first started to photograph him? Did you know he was going to become one of, if not, the most famous surfer from NY?
For sure, I definitely view Bal as more of a brother or son. I first met Bal when he was nine. He would surf a shorebreak spot that myself and the rest of the Unsound crew frequented. It was one of the better and more difficult spots to surf in our area. Bal was a tiny little grom surfing a beat up old board with the nose duct taped up so it wouldn’t fall off. Even at that age, and on that equipment, you could see that he was going to be on a whole different level. At that time we had an incredible crew of groms including Bal, Will Skudin, TJ Gumiela, Richie Bogart, Sean Killarney, Ryan Rochford, Brandon Fyfe, Chris Hamlet, and Vic Alarcon. Every time there were waves I would try grab as many of them as I could and go get some shots. Balaram’s mom Mary, was very trusting with me, if she only saw some of the days that I made him paddle out to get shots, she may have never let me bring him along again.. Sorry Mary, it all worked out for the best. 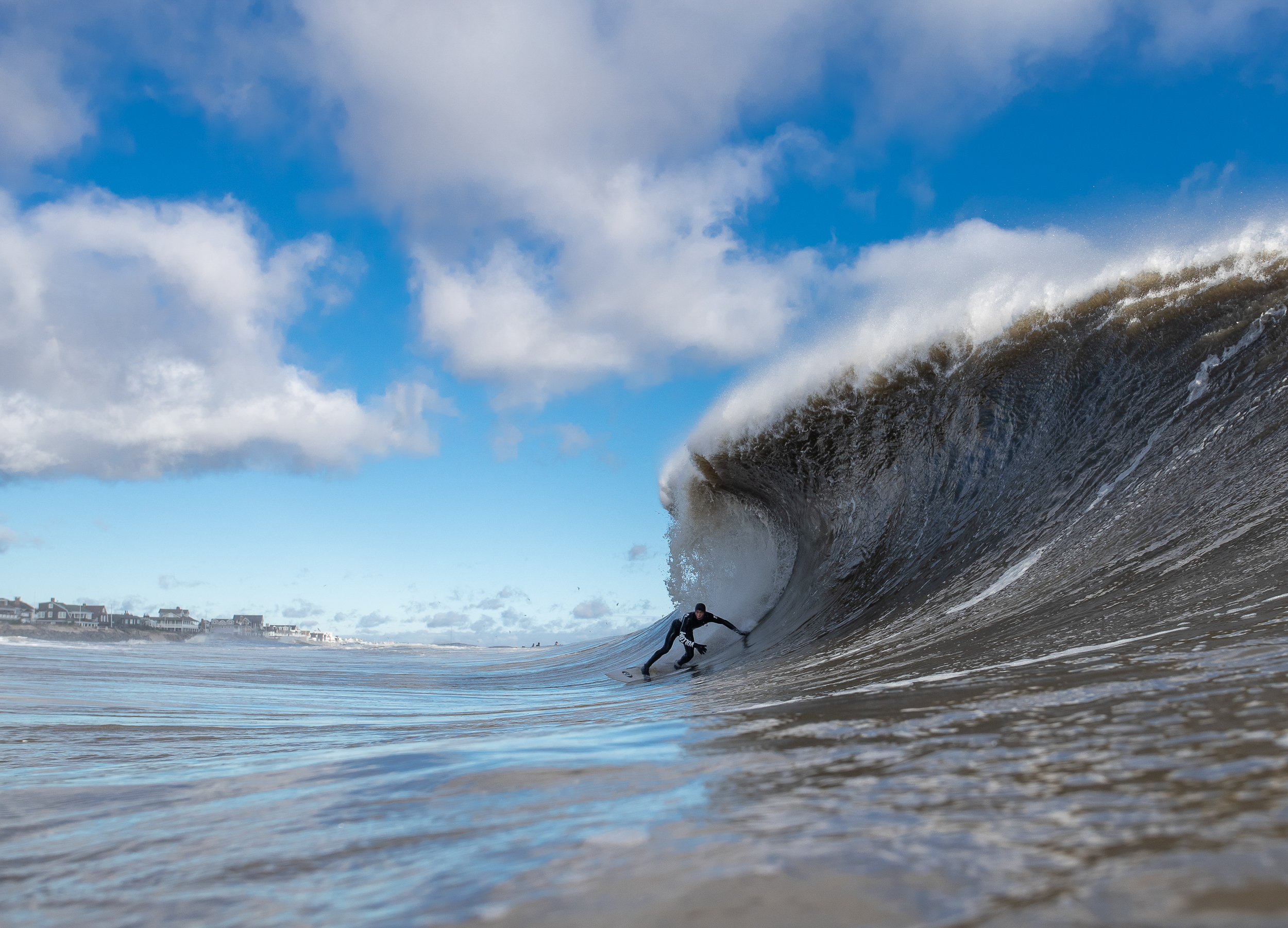 What’s the biggest challenge that comes with shooting in the water?
Just being in the right spot. Most of the time when the waves are good, the current is ripping, so it is really difficult to line up with whomever you are shooting.

What is your favorite memory from shooting surfing?
I don’t know If I have just one. I have years of fond memories traveling and hunting good surf with all the boys. I cherish them all equally.

What do you think makes a memorable surf photograph?
That’s hard to put into words.  If you asked 100 people you would probably get 100 different answers. I’ve always thought of myself as a “photojournalist”, I pretty much just document what I see. So for me, it’s not the photo that is memorable, it is the moment that is captured in the photo.

Any big photography plans coming up?
I’ve been toying with the idea of dropping a photo book. I’m sitting on a little over 20 years of photos, most of which have never really seen the light of day, so I was thinking a book might be a good reason to dust some of them off. Other than that I am just going to try to be in the right spot when the waves come up over here. 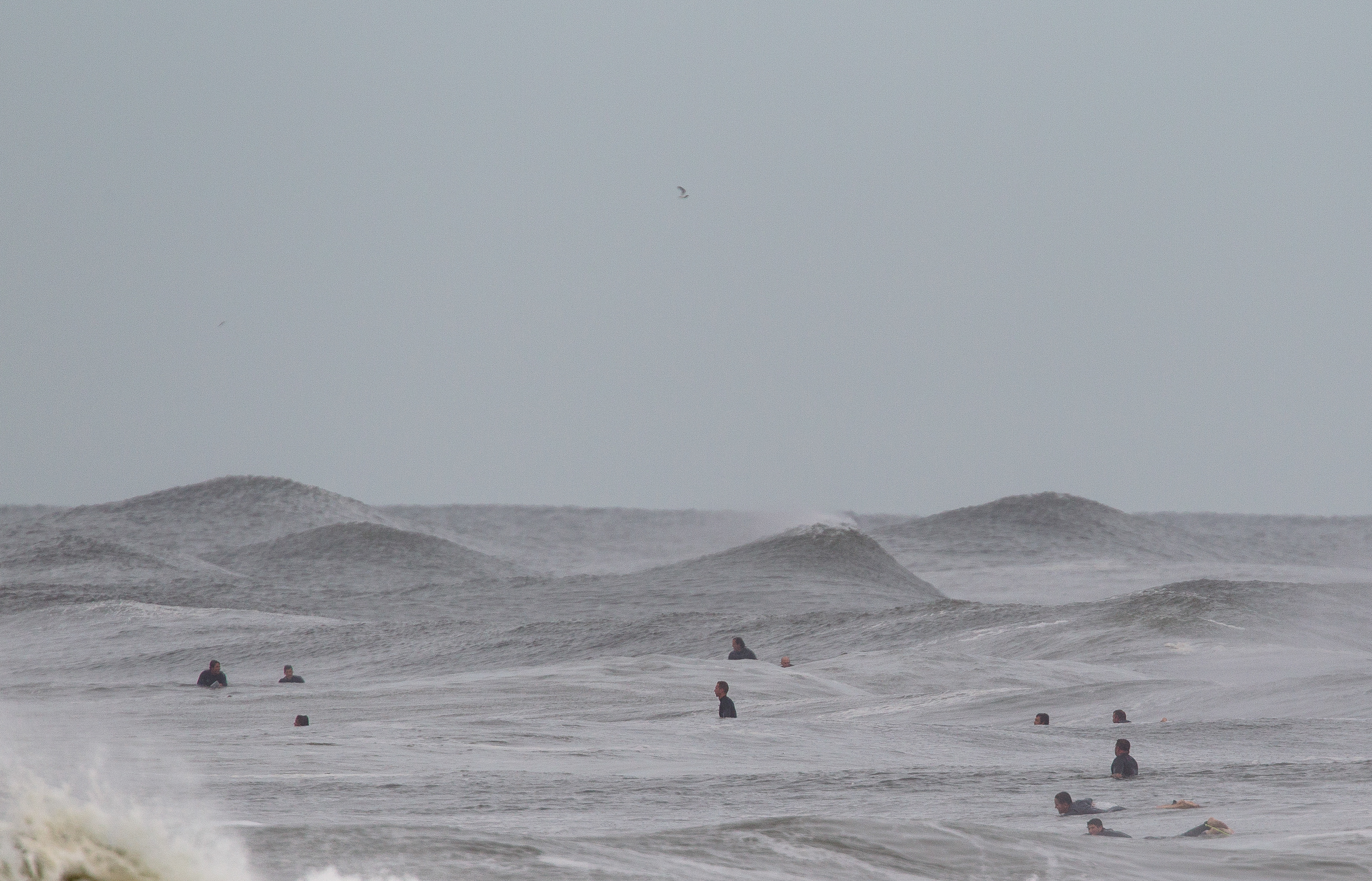 We think that’s a great idea. And it seems like you’d have the perfect place to sell the book (at Unsound Surf – the Long Beach surf shop Mike co-owns with Dave Juan). Tell us a little about the history of Unsound.
Yeah, I guess the shop would be as good a place as any to sell that sort of thing. Going way back to the beginning, Dave and I grew up in a small little town called East Rockaway, it’s a few miles inland and there were only a handful of surfers, so it was only natural that we started hanging out and surfing together. Fast forward a few years, Dave was working in a surf shop in Lido Beach, I was bartending and just getting serious about surf photography. The shop Dave was working in was not doing well and was about to close, so he came to me and said let’s open a surf shop. Thinking that it would be a great way for us to surf every day I said yeah let’s do it. We scraped together a little money, rented a storefront and Unsound Surf was born. ( FYI – the plan backfired, owning a surf shop doesn’t mean you get to surf everyday…haha)

Any parting advice for up and coming photographers out there?
I would say, just shoot everything and anything you can. I had no formal photography training, and today I look back at my early days where I was so hyper-focused on surf photography that I missed some opportunities to learn and grow as a photographer.

For more photos from Mike, check out his website, www.fullnelsonphoto.com and his Surfline Local Pro Page.

Why Does The Software Industry Build Bloatware?