Bad reports continue to float for Android fans as a researcher from Kaspersky Labs has revealed that in 2018 alone, 58,487 users were trapped by stalkerware applications installed on their devices.

Although commercial spywares are hard to identify but they have further given proofs in their study by showing results taken with the help of the anti-virus software, whenever someone scanned their phones or tablets.

In a comprehensive blog post, Alexey Firsh went on to claim that the threat doesn’t end here. During the same time period, over 187,000 users also encountered ransomware, hence making the platform a hub of suspicious activities again.

About 35,000 of the listed devices were infected by the spyware before the user decided to scan the device with KasperSky Lab for the first time and a whopping 26,619 samples of stalkerware programs were also caught during the test.

However, according to Firsh, unlike malware, stalkerware operates differently. While security software can identify the former due to its type, commercial spywares doesn’t come up as a virus. It exists in the phone to spy on the data of people without letting them know about it.

Previously such programs were used in the devices to let people know about its location in case of lost or theft. But now, these stalkerware has started to operate in a totally illegal manner.

This chart highlights the most detected stalkerware Android apps based on Kaspersky Lab data: 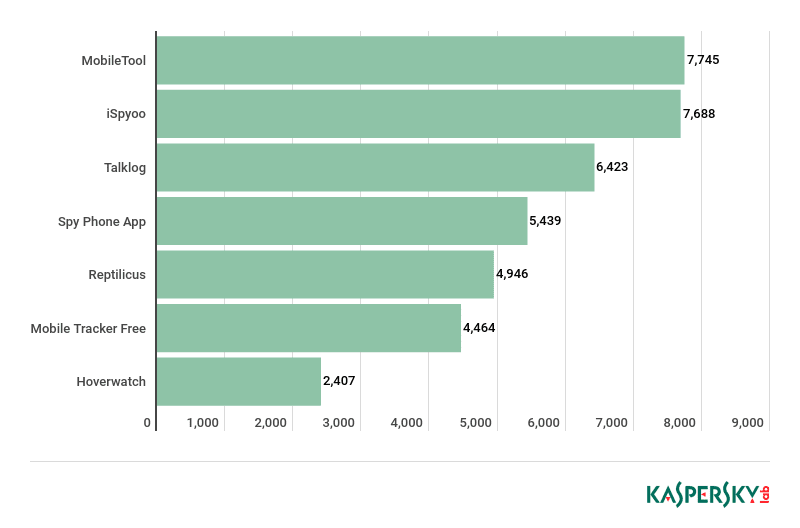 From distributing it through dedicated landing pages to invading into the privacy of people, these applications continue to perform their tasks in the background even without ever appearing on your phone screen.

In response to the threats related to stalkerwares, Kaspersky Lab decided to release an additional feature which will now detect any kind of commercial spyware on your devices. The researchers believe that such programs can bring in more threats like breaching the legislation of mobile application stores or collecting all sorts of data in your phone for financial extortion as well.

Just like the real world, there are people who always look forward keep an eye on your data and benefit from it. So to protect yourself in a better way, now is the time that you should also be fully informed about the operations running in your phone.

Andy Rubin, the father of Android, is reportedly working on a new smartphone that...