Through the years Manatee Technical College students have consistently brought home winning medals from national skills competitions. This year the adult career and technical education institution was preparing to send another national winner to a WorldSkills’ competition in Kazan, Russia.

Parrish resident Matthew Vreman, who graduated from MTC in 2017, will be heading to WorldSkills, an Olympic-like international competition, to represent the United States in web technologies.

An international organization of 80-plus country members, WorldSkills’ mission is to promote and develop trade and technical skills as careers. Competitions will be held during the week of Aug. 22 through Aug. 27 at WorldSkills in 52 separate skill sectors, such as web technology, hairdressing, concrete construction work, and fashion technology. “I’m nervous because it’s a big competition,” Vreman, 21, said, “but I’m excited to do my best and see what happens.” Vreman and his team member, Belinda Velez, were gold medal winners in web design at the SkillsUSA competition in Lousiville, Ky., in June 2018. SkillsUSA is the United States representative to WorldSkills. “I was in shock,” Vreman said. “It hadn’t sunk in how big a deal it was.” The big deal was that the win qualified him to go to the WorldSkill games.

Vreman and Velez, who also graduated from MTC, were team members and first-place winners in the state competitions held in Pasco County, qualifying them for SkillsUSA in Louisville. “It was a great experience (competing in Louisville),” Velez said. “In the beginning I was a bit overwhelmed because I was new to web design. Matthew and I have different levels of skills, but we made a good partnership.” Velez, 31, was not eligible to compete in the WorldSkills competition because the international rules have an age limit of 21 years old. 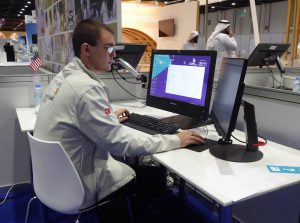 Matthew Vreman works on a web design problem at the WorldSkills Asia region games in Abu Dhabi in November 2018. Attending as a guest, he gained experience for his trip to compete in the WorldSkills games in Kazan, Russia, in August.
PROVIDED PHOTO

Nonetheless, the experience was rewarding for Velez, who also works with Vreman at Rewired Solutions in Sarasota as a web designer. “There were so many event competitors, so I was able to see all the different kinds of skills and meet students from all over the country,” she said.

Vreman remembered how he felt at the closing ceremonies, which are similar to the Olympics where the bronze medal winners are announced first, then the silver, followed by the gold. “Thirteen teams competed, and I figured we were near the top,” he said. “They announced third place, then second, and the field for first was being narrowed.Then they announced first place, and they called our names.”

Vreman and Velez’ web development instructor at MTC, Vera Bourenina, encouraged the two students to apply for the SkillsUSA competition. Bourenina, who has been teaching at MTC for 19 years, said she was really proud of her former students and was confident in Vreman’s abilities to win in Russia. “I wasn’t surprised when Matthew won first place (in Louisville),” she said. “I always believed in Matthew, his strength and knowledge. His motto is ‘Never give up!’”

“I was invited as a guest and not scored,” Vreman said. “It was really neat, but I didn’t have much time to see any sites, though.” 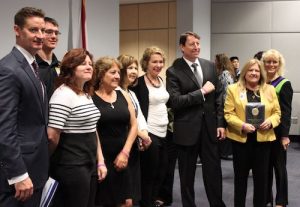 Matthew Vreman, second from left, who will travel to Russia in August to compete in the WorldSkills games, was recognized at Manatee Technical College in April 2016 for the redesign of the website of the To Inform Families First non-profit organization by State Senator Bill Galvano, third from right, and other supporters.
PROVIDED PHOTO

At the Abu Dhabi competition, the contestants are not focused on the quality of work, unlike the national competition. “They were more interested in the speed of getting it all done,” explained Vreman.

The web design skill test was held over a 6-hour period. The competitors were given a work order outlining what the website entailed. “It was all straight coding. I used HTML, CSS and Java Script.” said Vreman. “You’re timed. If you don’t complete the tasks on the work order, you are docked points.”

Born in Troy, Ohio, Vreman moved to Manatee County with his family when he was 6 years old. He was home schooled until he went to South College of Florida and dual enrolled in high school and college classes.Vreman graduated high school in 2015 and is a few credits short of his associates degree. But he went on and enrolled in the MTC web development program in 2015 where Bourenina encouraged him to apply to compete in SkillsUSA

When Vreman is not working or preparing for the WorldSkills competition, he may do a little bit of computer gaming. But most of his free time is spent in service to his church, Christian Reform Church at 26th Street West and Cortez Road in Bradenton. “I’m heavily involved with my church,” Vreman said. He handles the sound and light system every Sunday and helps in the youth program. 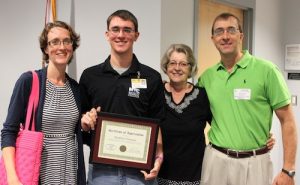 Matthew Vreman, second from left, his parents, Mike and Susan Vreman, and grandmother, Will Vreman attended ceremonies recognizing Matthew for his community service of redesigning the website of the To Inform Families First non-profit organization in April 2016.
PROVIDED PHOTO

His instructor at MTC, Bourenina, is very proud of her former student and his achievements. “Matthew was an intelligent, hard-working, curious, and extremely polite and humble student,” she said. “It was obvious that web technology became his passion from his first days as a student in my class. Matthew’s problem-solving skills were outstanding; he always helped other students with challenges,” Bourenina said.

Bourenina added that Vreman was very community oriented and was involved in a project for the To Inform Families First non-profit organization. He received an award for fully redesigning the website for the “TIFF Initiative,” a non-profit organization that promotes emergency contact registration. This project was voted as one of the top 50 best government innovations, according to an MTC press release.

Although no longer a student at MTC, Vreman also offered his help in training students and preparing them for national web design contests and the national SkillsUSA competition, she said. Bourenina encourages her students to tryout for various competitions, especially SkillsUSA. “SkillsUSA competitions allow students to be better prepared for employment in industry,” she said. “They give students a vision of themselves as future leaders in industry and champions in their workplace. For example,” she explained, “during the web design competition, contestants show their skills in various aspects of web development: team work, understanding client’s needs, following web accessibility standards, project management skills, and so on.”

Bourenina explained that MTC also benefits from students participating in national and international competitions. “Participation in contests is important for the school. MTC is recognized for excellence in preparing our students for jobs and careers.” 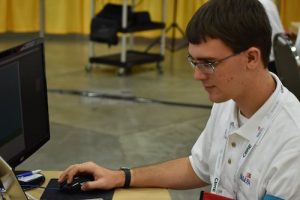 Matthew Vreman codes a website at the SkillsUSA games in Louisville, Ky., in June 2018. Vreman and his team mate, Belinda Velez, won a gold medal for web design at the competition.
PROVIDED PHOTO

Also, students benefit from the experience of traveling to other areas. “Students meet other students from other places, learn from each other, share tips, and so on,” Bourenina said. “In Louisville, we visited museums, tech centers, and other places of interests. It was an enriching experience. Of course, communication with students from other countries can open a door to a global network of web developers and allows learning about different cultures,” she added.

Vreman believes the trip to Russia will be a good experience for him. “I’m excited about going to another country and have been doing research on Kazan,” he said. “I got a taste of meeting people from Asia (in Abu Dhabi), and now I’ll meet people from all over the world. Travelling outside the country is very different and a great experience. America is a great place. We have a lot of different cultures, but it’s not the same as experiencing a completely different country.”

Along with Bourenina’s support, Vreman has the confidence of his former teammate, Velez. “I know Matthew is going to do great,” she said. “He has a lot of talent, and he has a good chance of winning in Russia.”

Watch a WorldSkills produced video of Matthew Vreman talking about his upcoming trip to Russia at www.youtube/XhRrEGTBAnw. For more information about Manatee Technical College, visit its website at www. manateetech.edu. To learn more about SkillsUSA, go to www.skillsusa.org on the Internet and www.worldskills.org for WorldSkills.

How online programs and treatments save lives